Japan Top Things to See & Do 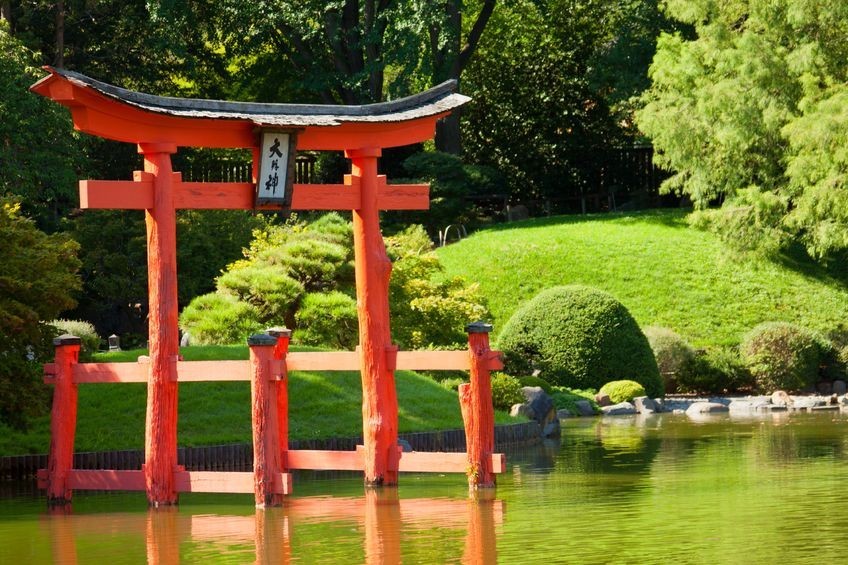 Visiting a traditional Japanese garden is a must-do activity along with exploring Castles, Museums, Temples and Shrines.
Japanese gardens  are traditional gardens whose designs are accompanied by Japanese aesthetics and philosophical ideas, avoid artificial ornamentation, and highlight the natural landscape with spiritual ideas in mind conceived as a representation of a natural setting.
Japanese gardens always have water, either a pond or stream, in the dry rock garden represented by white sand.
In Buddhist symbolism, water and stone are the yin and yang, two opposites that complement and complete each other.
The basic principle of a Japanese garden is to create harmony and balance.Gardens in Japan are usually part of templesor built to be enjoyed from the house.
The art of garden making was probably imported into Japan from China. Many Japanese merchants during the Asuka period used to visit its neighboring country China. They were influenced by the Chinese arts.
The beauty of traditional style Chinese gardens inspired them to make their own.
There are many types of Japanese gardens.
The contemplation  style of garden (kanshō) is designed to be studied and enjoyed from one specific place.
Many-pleasure style of garden (kaiyū) has a central pond and many paths.
The  walking style of garden (shūyū) is intended to be looked at from a path. 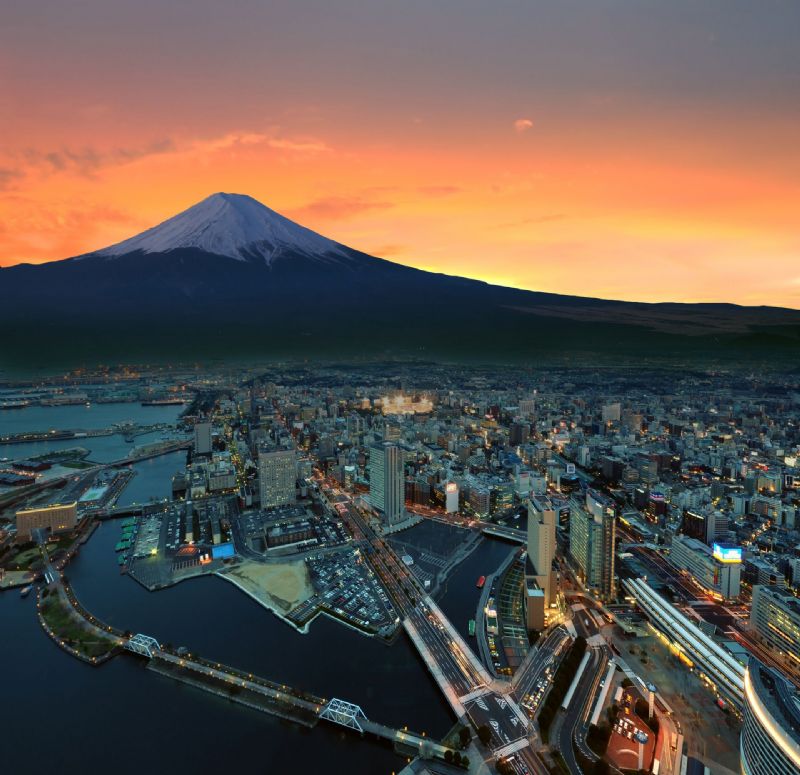 Mount Fuji Mount Fuji is the world-famous symbol of Japan; a beautifully symmetrical, snow-capped cone rising from the earth, the highest mountain in Japan, standing 3,776 m (12,389.2 ft).
Mount Fuji is one of Japan's "Three Holy Mountains" (with Mount Tate and Mount Haku).It was added to the World Heritage List as a Cultural Site on 2013.
Mount Fuji is an active volcano, which most recently erupted in 1707.
Mount Fuji is considered a sacred mountain by the Shinto from the 7th century, Since 1872 women have been allowed to climb the mountain.Mount Fuji welcomes over 250,000 climbers on its slopes each year.

Mount Fuji in fact made up of three successive volcanoes.
Mount Fuji has several meanings behind it. The origin of the mountain’s name is uncertain,There’s no record of it first being named. Among the several theories about the source of the name is that it is derived from an Ainu term meaning “fire,” coupled with san, the Japanese word for mountain.
A popular theory says the name was originally written to mean Peerless Mountain, since it is a mountain that is like no other in Japan.

Tip
Easy way to view Mount Fuji is from the train on a trip between Tokyo and Osaka. If you take the shinkansen from Tokyo in direction of Nagoya, Kyoto and Osaka, the best view of the mountain can be enjoyed from around Shin-Fuji Station on the right hand side of the train.

The best places to see it are from the shores of the Fuji Five Lakes, scattered nearby. The most popular is Lake Kawaguchiko, easily accessible by public transport from Tokyo. Other top viewing spots include lakes Saiko and Motosuko, and the towns of Hakone and Kamakura. 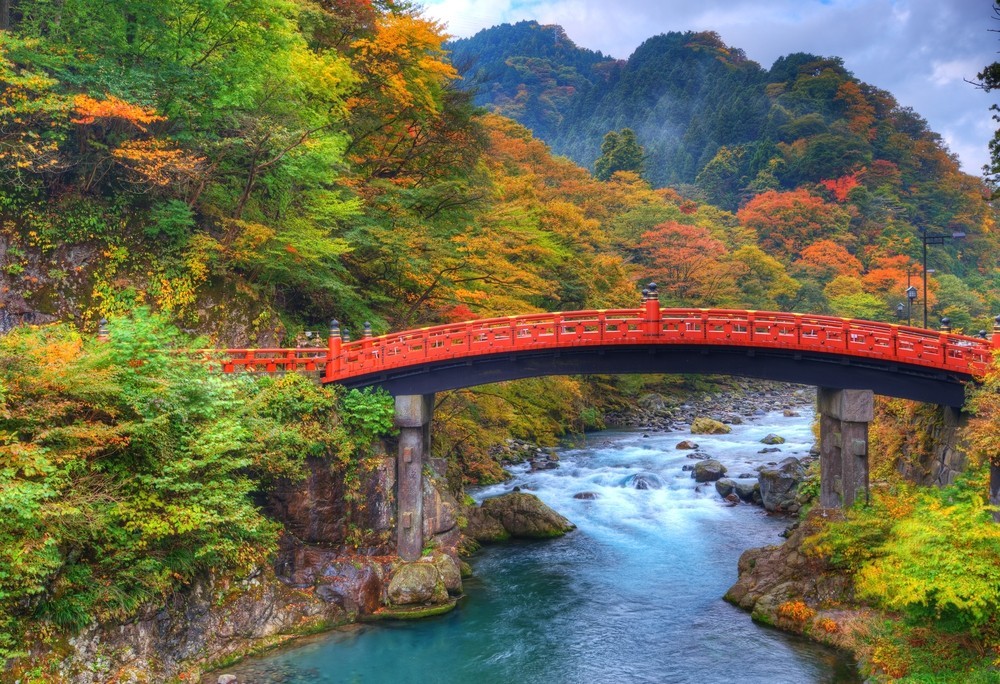 Nikkō  is a city located in Tochigi Prefecture, Japan  at the entrance to Nikko National Park. It is a popular destination for tourists.

Nikko, which means "sunlight" in Japanese, was founded in the 8th century by the Buddhist priest Shodo and is an extant showcase of the wealth and power of the Tokugawa clan.

Nikko is famous  for Toshogu, Japan's most lavishly decorated shrine and the mausoleum of Tokugawa Ieyasu, the founder of the Tokugawa shogunate.

Nikko offers a lush landscape, a peaceful respite, is well-known for its natural beauty from verdant forests, rolling hills and breathtaking waterfalls(The Kegon Falls has an impressive height of 97 meters and is a representative natural landmark of Nikko)  to raging rivers streams and a beautiful lake.
During the winter, there is skiing and other snow-related activities, while spring offers the cherry blossoms.

Nikko Main AttractionsThe temple area in Nikko consists of the three main temples:Rinnoji, Futarasan and Toshogu Japan’s most ornate shrine, it comprises 55 lavishly decorated buildings set in the forest, including the mausoleum of Tokugawa Ieyasu.

Shinkyo Bridge
"Sacred Bridge" AKA "The Snake Bridge" spanning the Daiya River.
This much-photographed red bridge separates the shrines from the town of Nikko. In feudal times, only the shogun was permitted to cross the bridge, and even today it's barred from pedestrian traffic. has been a World Heritage Site since 1999.
The Sacred Stable,the most famous symbol here is the carving of the three wise monkeys, who "hear no evil,  see no evil, speak no evil". 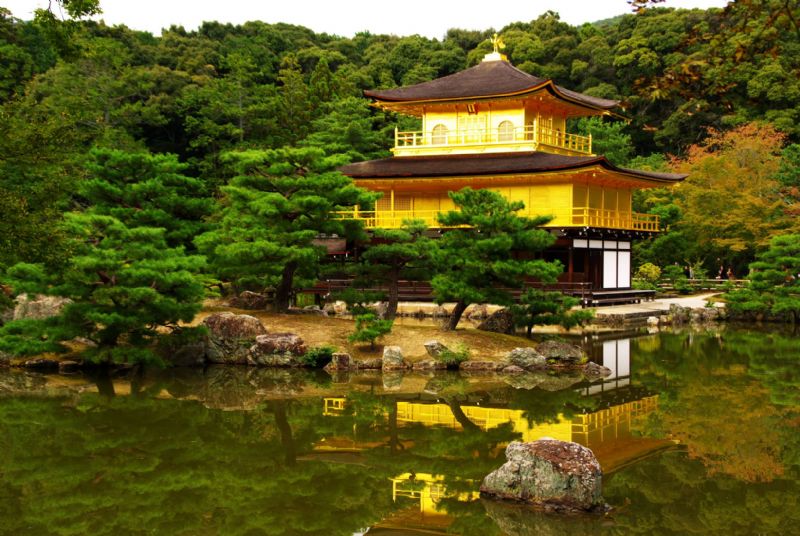 Destroyed by fire many times throughout the centuries, this phoenix always rises from the ashes. The present building dates from 1955, after a fanatical monk burned it to destroy this symbol of beauty.

Top two floors are completely covered in gold leaf, overlooking a large pond.(There is an association between gold and Pure Land Buddhism where the former is considered to represent spiritual purity).

One of the most popular buildings in Kyoto, attracting many visitors annually.Visitors enter through the Chumon Gate along a pretty path shaded by ancient pines and maples, ablaze with color in the fall.

One of the most popular buildings in Kyoto, attracting many visitors annually.Visitors enter through the Chumon Gate along a pretty path shaded by ancient pines and maples, ablaze with color in the fall.
Official site 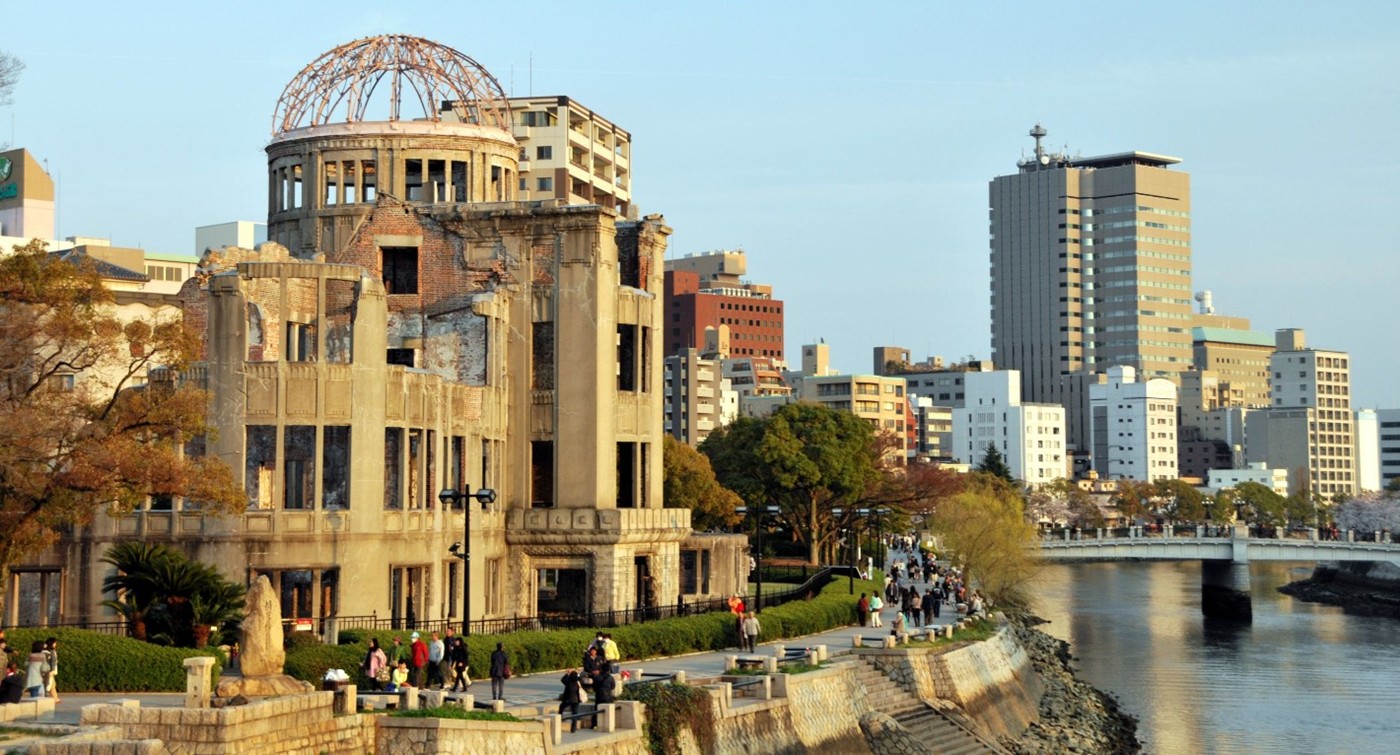 Hiroshima Is the capital of Hiroshima Prefecture in Japan. It is rich in the natural beauty of the Inland Sea and the Chugoku Mountains, with mountains, sea, rivers, valleys, plains, basins that characterize Japan's landscape.
The city is widely known for being the target of the first atomic bombing in human history, however, it was rebuilt following the war into a major cultural center of the nation.
Hiroshima was founded in 1598 as a castle town on the Ōta River delta.
There are two World Heritage Sites in Hiroshima. One is Itsukushima Shrine on Miyajima and the other is the Hiroshima Peace Memorial - known around the world as the Atomic Bomb Dome. (This silent structure is the skeletal form of the surviving remains of the Hiroshima Prefectural Industrial Promotional Hall -constructed in 1914).
It symbolizes the tremendous destructive power, which humankind can invent) . At 8:15 a.m., the U.S. B-29 bomber Enola Gay dropped a 4-ton uranium bomb, dubbed Little Boy, from a height of 31,500 feet on the city center, targeting the Aioi Bridge. The bomb exploded 43 seconds later, 2,000 feet above the ground. Many people suffocated. The immense explosions extended out about one mile, swiftly consuming oxygen in the blast areas.

The most important meaning of the surviving structure of the Hiroshima Peace Memorial is in what it symbolizes.This silent structure is the skeletal form of the surviving remains of the Hiroshima Prefectural Industrial Promotional Hall (constructed in 1914). It symbolizes the tremendous destructive power, which humankind can invent. on the other hand, it also reminds us of the hope for world permanent peace.
Official site

Interesting and fun facts about Kiyomizu-dera 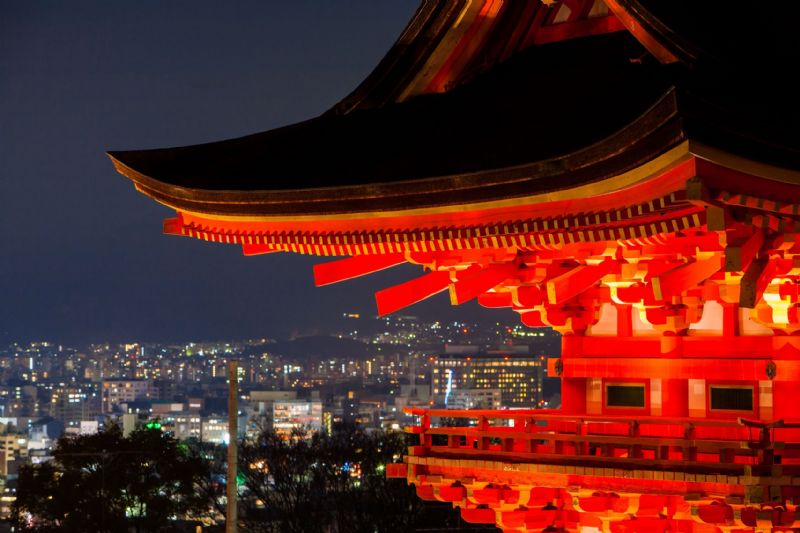 Kiyomizu-dera is a Buddhist temple in eastern Kyoto,otherwise known as the 'Temple of the Pure Water Spring'.It was founded in 780, is part of the Historic Monuments of Ancient Kyoto.( from the 17th century).
Enchin Shonin was a priest from Nara who claimed to have received a vision which directed him to the exact location of a spring, the Otowa spring which gives its name to the site.
Kiyomizudera is best known for its wooden stage that juts out from its main hall, 13 meters above the hillside below.The temple’s wooden stage is undoubtedly what the temple is most famous for, offering an outstanding panoramic view of Kyoto rising out of a sea of maples the cherry blossoms and new green leaves of spring.
Address 294 Kiyomizu, Higashiyama Ward, Kyoto
Official site

Jigokudani Monkey Park It is famous for its large population of wild Japanese macaques (Macaca fuscata), more commonly referred to as snow monkeys, that go to the valley during the winter.
The very steep cliffs and the steam coming off the springs in everywhere, ancient people called this valley ‘Jigokudani (Hell valley, is a common name for Japanese valleys with volcanic activity).
The Jigokudani Monkey Park offers visitors the unique experience of seeing wild monkeys bathing in the park( they are the only troop of monkeys in the world known to enjoy bathing in natural hot springs!)   has one man-made pool around which the monkeys gather, located a few minutes' walk from the park entrance. the best timing for a visit is January and February.
Hours Summer: 8:30 – 17:00 (April to October)
Winter: 9:00 – 16:00 (November to March)
Entrance Fees
Adults: ¥800
Kids 6-12: ¥40 0
Kids 5 & Under: Free
Address:6845 Hirao, Yamanochi, Shimotakai District, Nagano 381
Official site