Azerbaijan Top Things to See & Do 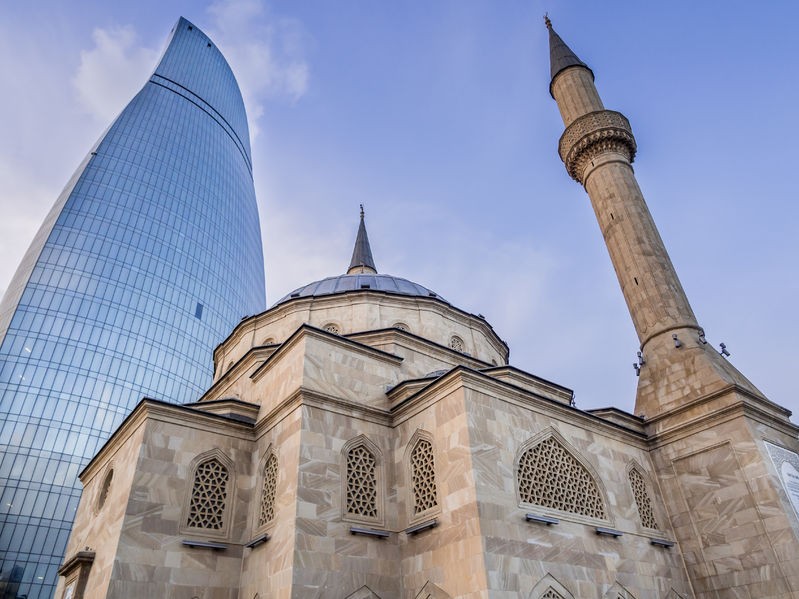 Baku (It’s pronounced Bah-koo) is the capital and largest city of Azerbaijan, as well as the largest city on the Caspian Sea and of the Caucasus region.
It lies on the western shore of the Caspian Sea and the southern side of the Abşeron Peninsula, around the wide curving sweep of the Bay of Baku.
Baku’s population  greater than 2.4 million. and is located 92 ft below sea level.
Baku is rich in history – it has actually been an ancient trade route since Roman times where goods would be traded between Central Asia and the west!
The city’s early developments are unknown, but it was ruled by the Shirvan-Shahs from the eastern Caucasus in the early Middle Ages and became their capital in the 12th century.
Baku was ruled by the Mongols in the 13th and 14th centuries, for whom the city would have been a strategic base in the consolidation of their power across Central Asia.
It was once part of the Mongol, Persian and Russian empires, before it became part of the Soviet Union. At last, Azerbaijan finally gained independence in 1991 and Baku became its capital.

Named the Flame Towers, the trio of skyscrapers  (height of 597 feet) was designed to appear like the flames of a fire. the towers symbolize the long history of fire worshipping in Azerbaijan.

Baku State University, the first university in Azerbaijan, was established on November 15, 1919.

In fact, Baku is one of only two capital cities that are officially below sea level (the other is Amsterdam).

Gobustan state historical and art reserve is one of the Worlds unique places. Gobustan State Reserve located west of the settlement of Gobustan, about 40 miles (64 km) southwest of the centre of Baku.
Gobustan State Reserve is very rich in archeological monuments, the reserve has more than 6,000 rock carvings, represent 40 000 years of rock art and prehistoric life which depict people, animals, battle-pieces, ritual dances, bullfights, boats with armed oarsmen, warriors with lances in their hands, camel caravans, pictures of sun and stars.

Azerbaijan is often described as otherworldly, and Mud Volcanoes of Azerbaijan is otherwordlyness incarnate a messy, bubbling, and sometimes explosive landscape.
Mud volcanoes are not really volcanoes at all, but take their name from their resemblance to the molten-lava kind.
Home to nearly a 50% of the world's mud volcanoes, 350 of the 700 volcanoes of the world are in the Azerbaijani Republic.
The mud volcano landscape at Gobustan National Park is one of the most interesting things to see in Azerbaijan.
The people call them “yanardagh” (burning mountain), “pilpila” (terrace), “gaynacha” (boiling water) and “bozdag” (grey mountain) alongside its geographical name – mud volcanoes.
It’s not oil or tar bubbling up from the earth, but mud – thick, goey, cold mud.

Nabran is a popular resort and municipality in Khachmaz Rayon of Azerbaijan, (on a 3-hour drive from the capital of Azerbaijan, Baku,)close to the Russia-Azerbaijan border.
The village Nabran is located in a northeast part of Azerbaijan on the bank of Caspian Sea and surrounded by forest, a subtropical forestland.
Nabran is located by the sea and so it is possible adore the wonderful beaches at Nabran.
Nabran has a plethora of water based activities that make the most of the ambient weather, including an aqua park and a variety of swimming pools all over the area.
Nabran is a settlement that spreads for several kilometers. Houses, hotels, entertainment facilities and restaurants bars,and there are nightclubs for those who want to experience some of the nightlife in Azerbaijan.