Slovenia Top Things to See & Do 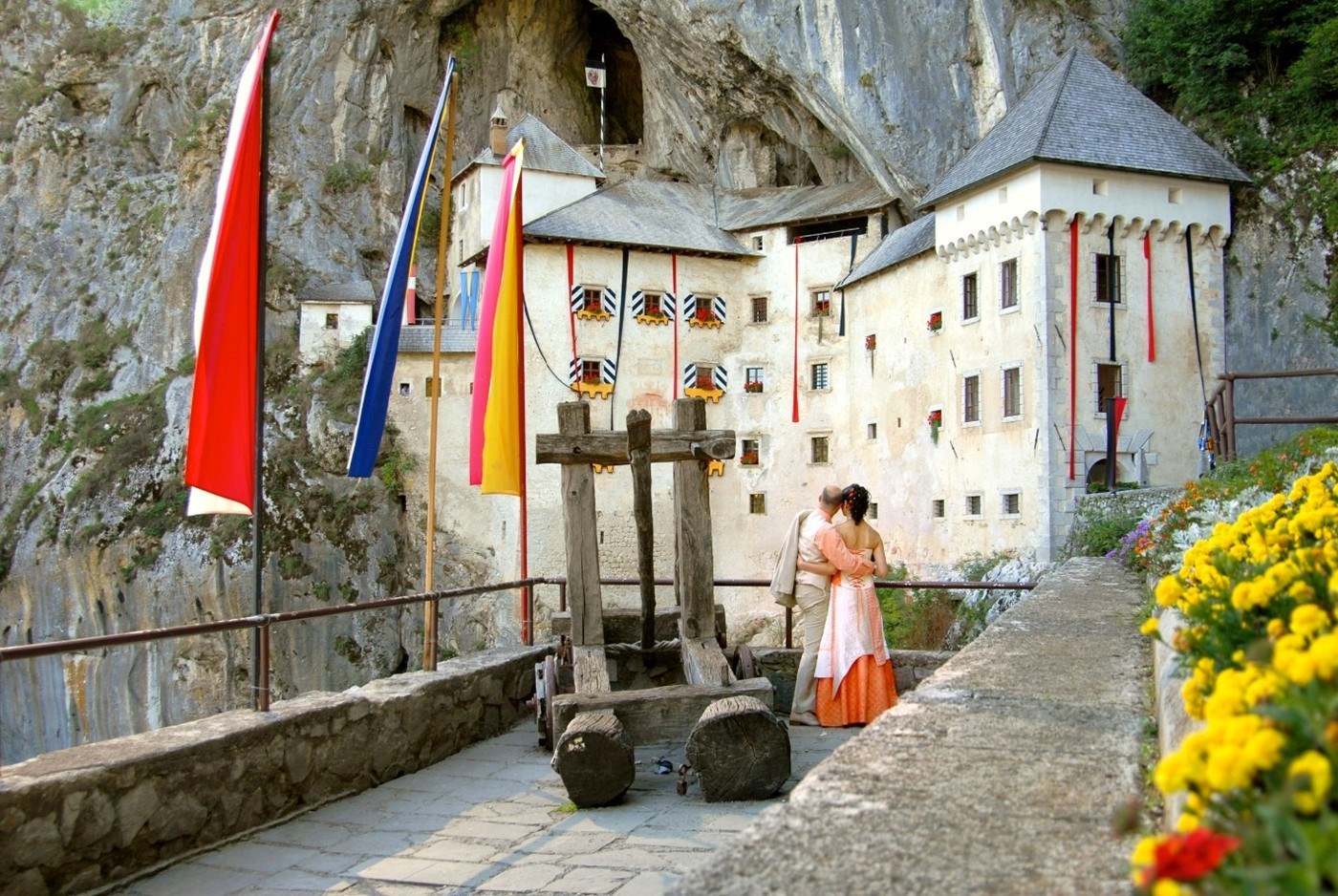 Predjama Castle, locally known as Predjama Grad, lies in the village with the same name, north west of the town of Postojna in Slovenia.

Predjama Castle is one of the most famous in Slovenia, attracting each year thousands of tourists. this amazing fortress, built within a cave, is not at all the kind of castle we’re familiar with,There are many majestic ancient castles around central Europe, but the one found at Predjama is unique.

This citadel is constructed into the rockface of a mountain!

Visitors marvel at how the building seamlessly blends with the rock, towering more than 400 feet above the river valley below.
The castle’s name in Slovenian –Predjamski Grad —  literally means “the castle in front of the cave.”

Predjama castle is located in the middle of a 123 m high, overhanging, limestone cliff, in the entrance of a cave. is a Renaissance castle.

Predjama Castle, was considered virtually impenetrable when it was constructed in the 13th century.
The castle has been completely reconstructed many times over the years. In more recent centuries, Predjama Castle became a hunting lodge for various Austrian aristocrats.
Inside the castle, visitors can see numerous replica weapons – lances, halberds, swords, battle hammers, longbows, crossbows and armour – in a faithfully reconstructed room in the main castle attic. 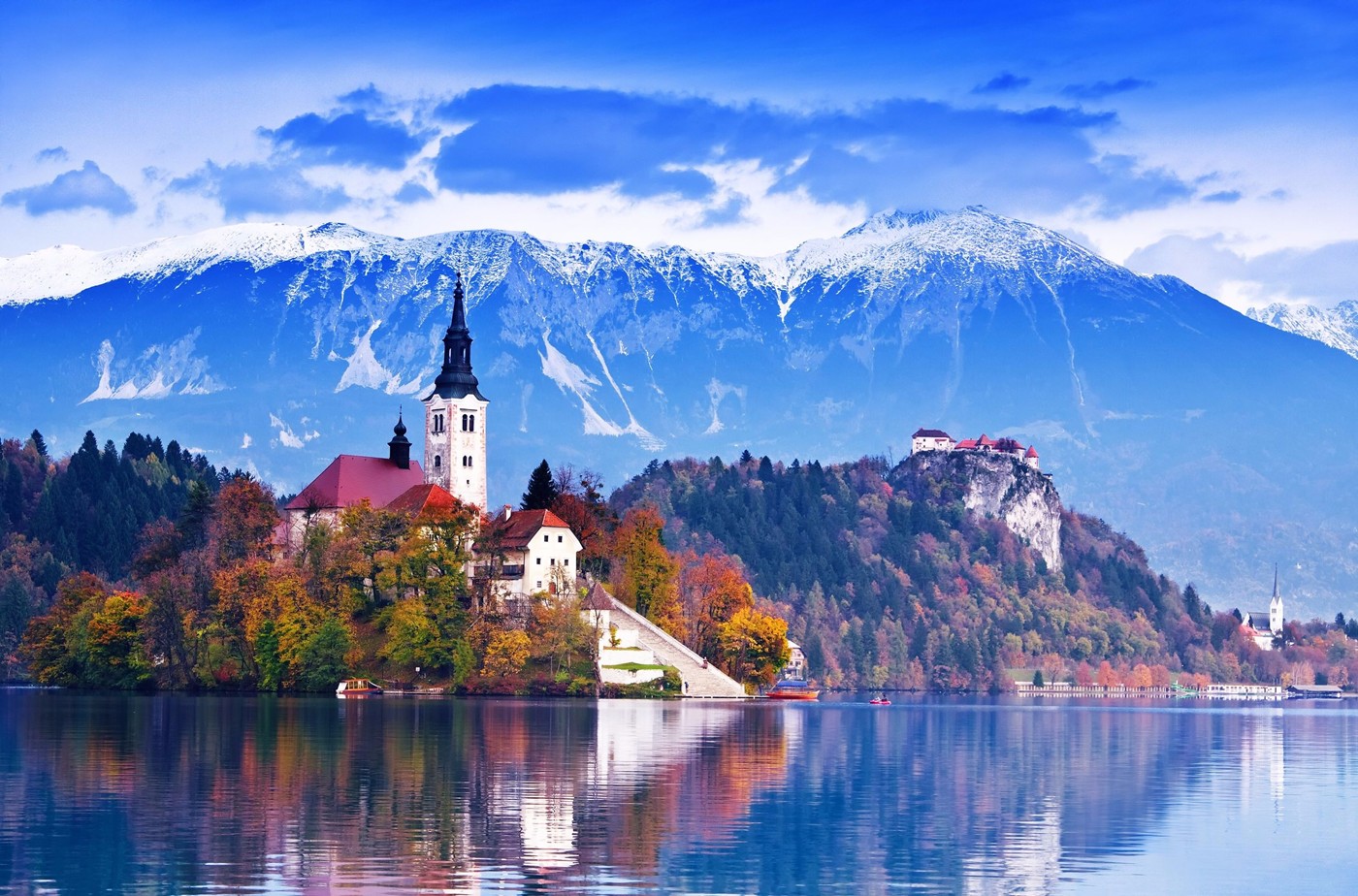 It is 2120 m long, up to 1380 m  wide with a maximum depth of 30 m.
In addition to the cobalt waters of Lake Bled, you should explore the area’s beautiful Alpine landscape.
Walking paths will get you around the lake with plenty of viewpoints and wooden benches en route.(Lake Bled is known for the presence of swans as well as ducks). There is nothing better than to stretch your legs with a lazy walk around the lake. The length is 6km.(There is also a tourist train that goes around the lake and stops at 7 locations).
Take a stroll along the lakeshore or taste the culinary delights in one of the restaurants.You can also  to visit the top sights, including the castle and the island in the middle of the lake.

One of the most photographed features of Lake Bled is the tiny wooded island of Blejski Otok.
With a postcard-perfect church crowning Slovenia’s only natural island,The rustic baroque church, the Pilgrimage Church of the Assumption of Mary, aka Church of Mary the Queen, aka Our Lady of the Lake, is famous for its wishing bell.
The church was built and rebuilt in the 15th and 17th centuries to its current form with a bell tower.
Bled castle, standing on a 130-meter high cliff, is one of the top attractions in this beautiful alpine town. Bled Castle, perched on a rocky precipice above Lake Bled is over 1000 years old.
And while it’s most famous for its dramatic location, a wine-tasting experience in the castle cellar is an absolute highlight.