Greece Top Things to See & Do

Corfu is a Greek island in the Ionian Sea. It is the second largest of the Ionian Islands.
The greenest island with dense vegetation, unmatched in natural beauty. With beautiful beaches on a coastline more than 210km long.
Corfu is known for its lush landscapem,The endless and beautiful sandy beaches The long fascinating, and turbulent history Also by the beautiful sightseeing.
Corfu is strongly influenced by the Venetians, the French and the English and for this reason has a cosmopolitan, multicultural charm.
A majestic fort, romantic trails and beaches where the vegetation merges with the sapphire sea.
According to historical sources, the first mention of the populated islands were already recorded 1300 BC.
From 1386 to 1797, Corfu was ruled by Venetian nobility..
The principal city of the island and seat of the municipality is also named Corfu, after the island’s name, with a population of  34,000 inhabitants.
Unesco has declared Corfu’s Old Town a world heritage site.In 2007
Old Town of Corfu City, which is guarded by mighty Venetian fortresses  and has its roots in the 8th century BC.
The three forts of the town, designed by renowned Venetian engineers, were used for four centuries to defend the maritime trading interests of the Republic of Venice against the Ottoman Empire.
The city also includes other prominent spots like Spianáda (the largest square in the Balkans ), Listón (the city’s trademark promenade), the city’s Cathedral and a considerable number of churches.(in the island there are 37 churches).
Mon Repos Palace with colonial elements,offering from its circular terrace an amazing view across the island of Pontikoníssi.

On the eastern side of town, the rocky shore crowned by two low peaks gave the name Koryfo to the island.
Corfu most interesting facts.
The island has two names Corfu is also called Kerkyra.(According to historical sources, the earliest reference to Corfu is the Mycenaean Greek word ko-ro-ku-ra-i-jo ("man from Kerkyra") 1300 BC).
Unification with modern Greece was concluded in 1864 under the Treaty of London.

The island is famous for its large amounts of olive trees. 3% of the world`s olive oil comes from Corfu.
Corfu was under the British rule from 1814 until 1864 when it was united with Greece.
The locals throw pots out of their windows and balconies smashing them into the streets in order to celebrate Christ’s resurrection every Easter.
The island was the cradle of culture and science. In Corfu was founded the first university or Greece, called the IONIAN UNIVERSITY and the first modern theater and opera of Greece.
Hebrew-Italian in a Venetian dialect also developed with some Greek words as many Italian Jews took refuge in Corfu. 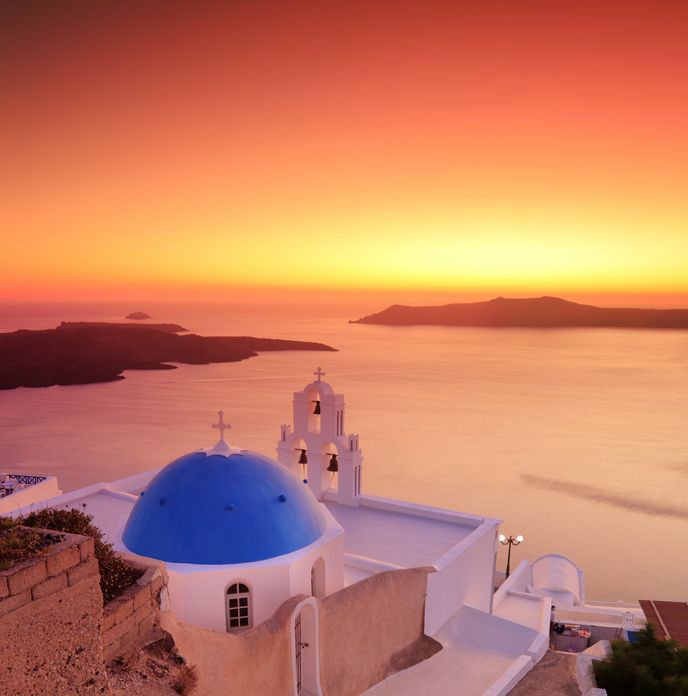 Santorini (or Thíra) ,is an island in the southern Aegean Sea,is actually a group of islands consisting of Thíra, Thirassiá, Asproníssi, Palea and Nea Kaméni in the southernmost part of Cyclades.
The island was the site of one of the largest volcanic eruptions in recorded history The last big eruption occurred 3,600 years ago (during the Minoan Age), when igneous material (mainly ash, pumice and lava stones) covered the three islands (Thíra, Thirassiá and Asproníssi).
It’s probably one of the most iconic Greek islands to visit,The enthralling sunset view in Oia Santorini, the minimal Cycladic architecture, the luxurious Santorini Greece hotels, the delicious restaurants, the dramatic rocky landscape, and the Santorini volcano the dramatic shape of the caldera.

Like a perfect ring around the volcano that once wiped out the entire Minoan civilization is one of the most surreal landscapes in Europe. (The caldera of Santorini is the only inhabited in the world, the population of Santorini is about 15,000 people).
The name ‘Santorini’ was coined from two words ‘Santa’ which means ‘Saint’ and Irenene which means ‘Irene.’ The name is believed to be that of a church located in the Valley of Therassia.

Firá is the picturesque capital of the island, the scenic town has some old ruins which include some Greek and Roman architecture.
Over 2 million tourists visit Santorini each year.
One of the major reasons why the island of Santorini stands out is its distinctive architecture, white painted villages, Whitewashed houses in complete harmony with its volcanic scenery.

Athens is the capital (In 1834, it became the capital of the modern Greek state) and largest city of Greece, and is one of the world's oldest cities, dating from the first settlement in the Neolithic age, with its recorded history spanning over 3,400 years.
This is a city steeped in history (In 500 B.C., a system was enacted in Athens where eligible citizens could directly vote on laws – giving rise to democracy).
As one of the oldest cities in the world, Athens turns out to be surprising and has some of the largest collection of Greek ruins and artifacts in the world.
The modern city is built around ancient monuments, the heritage of the classical era is still evident in the city, represented by ancient monuments and works of art, the most famous of all being the Parthenon.
Athens  is home to over 665,000 people.
About 18 million tourists visit Athens each year.

Athens best points of interest:
Acropolis The Acropolis of Athens,  earned a spot on the UNESCO World Heritage Site.
Acropolis Museum.(It is made of steel, glass and concrete and it houses 4,000 priceless finds from the Acropolis)
Ancient Agora.
National Archeological Museum
Syntagma Square,and the changing of the guard ceremony every hour.
Monastiraki neighborhood.
Mount Lycabettus with a stunning view of Athens and the Acropolis.
Ermou street for shopping.

Rhodes is the largest island of the Dodecanese islands and is also the island group's historical capital. It is one of the most popular tourist destinations in Europe.
The principal town of the island and seat of the municipality is Rhodes.with 50,000 inhabitants.
The most important monument is Rhodes Old Town.
Rhodes has a rich historical past, Rhodes' nickname is The Island of the Knights, named after the Knights of Saint John of Jerusalem, who ruled the island from 1310 to 1522.
Rhodes Old Town is a Unesco World Heritage Site and one of the best-preserved medieval towns in Europe.
Historically, Rhodes island was very famous worldwide for the Colossus of Rhodes, one of the Seven Wonders of the Ancient World.
Sights & Historical Landmarks in Rhodes

The Peloponnese is a peninsula and geographic region in southern Greece.
It is connected to the central part of the country by the Isthmus of Corinth land bridge which separates the Gulf of Corinth from the Saronic Gulf.
The Peloponnese peninsula beautiful beaches, incredible ancient archaeological sites, caves, mountains, great food and unique architecture and wine.
The Peloponnese this is the real Greece all the beauty and culture of the islands without the crowds.
Greece Top Things to See & Do -Peloponnese

Thessaloniki is an ancient city with glorious moments, and some of the worst human tragedies in the world bearing the marks of its stormy history.
It has a similar gritty charm yet a vastly different feel,which give it a special beauty and charm.
The laid-back yet vibrant atmosphere of the city is its calling card.
It has a great food scene,excellent museums, historic architecture and a beautiful promenade.
Thessaloniki is the second-largest city in Greece after Athens.
Thessaloniki located 515 km north of Athens.

Here are some interesting Facts and information about Thessaloniki

Chalkidiki is a peninsula in Northern Greece, is a popular summer tourist destination famed for its cosmopolitan seaside resorts, beautiful natural landscape, and exotic beaches.
In July, August, Halkidiki is packed with in tourists, all seeking to enjoy of the hotels and the  excellent beaches in the whole of Greece.
Halkidiki is a peninsula, which is divided into three smaller peninsulas, the so-called  three legs.
Besides peninsulas, however, Halkidiki prefecture also comprises North Halkidiki, East coast and West coast regions.
The capital of Chalkidiki is the main town of Polygyros, located in the centre of the peninsula.
The first leg is named Kassandra. The second leg is named Sithonia and the third leg is named Athos and is a close monastic community, where the entrance is allowed only to men with special permission.
If activities in magnificent nature are your favorite, Sithonia is irreplaceable.
If you are looking for a night entertainment, Kassandra is your best choice and Athos, features various interesting monasteries in an engaging environment.

Island of Evia is the second largest island in Greece. It is an island , but it is connected to it by two bridges. Its large size offers visitors a unique variety of choices , easily accessible and available all year.
Evia  with its endless beaches , is not only an ideal destination for seaside holidays , but also for unique adventures along forgotten mountain trails.
Evia Island Top Things to See & Do

Zagori  is a region in the Pindus mountains in Epirus, in northwestern Greece.
Ioannina, the provincial capital, is at the southern,the south-western side is formed by Mount Mitsikeli (1,810m).
The Aoos river  forms the northern boundary, while the south-eastern side runs along the Varda river to Mount Mavrovouni (2,100m) near Metsovo.
The population of the area is about 3,700.

This is a pure and seductive holiday destination for all seasons.
Vikos Gorge in Epirus is registered in the Guinness book of records, rivers, dense forests, steep slopes, natural pools, rocky peaks and a cluster of stone villageswith a 46 villages known as Zagori villages, and rafting in the gorgeous crystal clear waters of the local river.
The local architecture is defined by stone, wood and slate rock.
In ancient times the Zagori region was known as Parorea, meaning “beyond the mountains”.
In the 6th century, when the Slavs arrived, it was renamed Zagori, the name “Zagori” is Slavic and means “beyond the mountains”.

Meteora Monasteries. There are 6 working monasteries in total, 2 of which have nuns.
The word Meteora means literally 'hovering in the air.
Amazing a marvel of nature giant rocks one of the most spectacular places to visit in Greece.

The Monastery of Varlaam is the second largest monastery in the Meteora. It was built in 1541. In the 16th century, two monks, enlarged the chapel and built a monastery.
Since 1350, the ascent to the monastery was made by wooden ladders.From the early part of the 19th century, they created steps carved in the rock.
Greece Top Things to See & Do -Meteora Monasteries

Unique traditional settlements, crystal clear waters, sandy or pebbly beaches, archaeological finds, imposing Byzantine and medieval monuments.
The islands of Dodecanese, are considered alternative holiday destinations.
The literal translation of Dodecanese is "Twelve Islands" although there are 16 inhabited ones and up to 27 in total.
The most popular islands of Dodecanese are Rhodes and Kos but  there are smaller islands with completely different characters and easy going atmosphere  Leros, Kalymnos,Symi, Astypalea, Pserimos and Karpathos.

The islands of Dodecanese situated in south-eastern Aegean, between the Cyclades and the coasts of Turkey, and the island Crete.
The Dodecanese Islands  have had a turbulent history.
The islands of Dodecanese  joined the modern Greek state in 1948 after centuries of rule by Ottomans and Italians and the scene of ferocious battles between German and British forces in 1943–44.
All islands of the Dodecanese are connected to the mainland and other islands, there are also International flights to the larger islands Rhodes and Kos.
Dodecanese Greek Islands

Greece in Pictures-Beautiful Places to Photograph