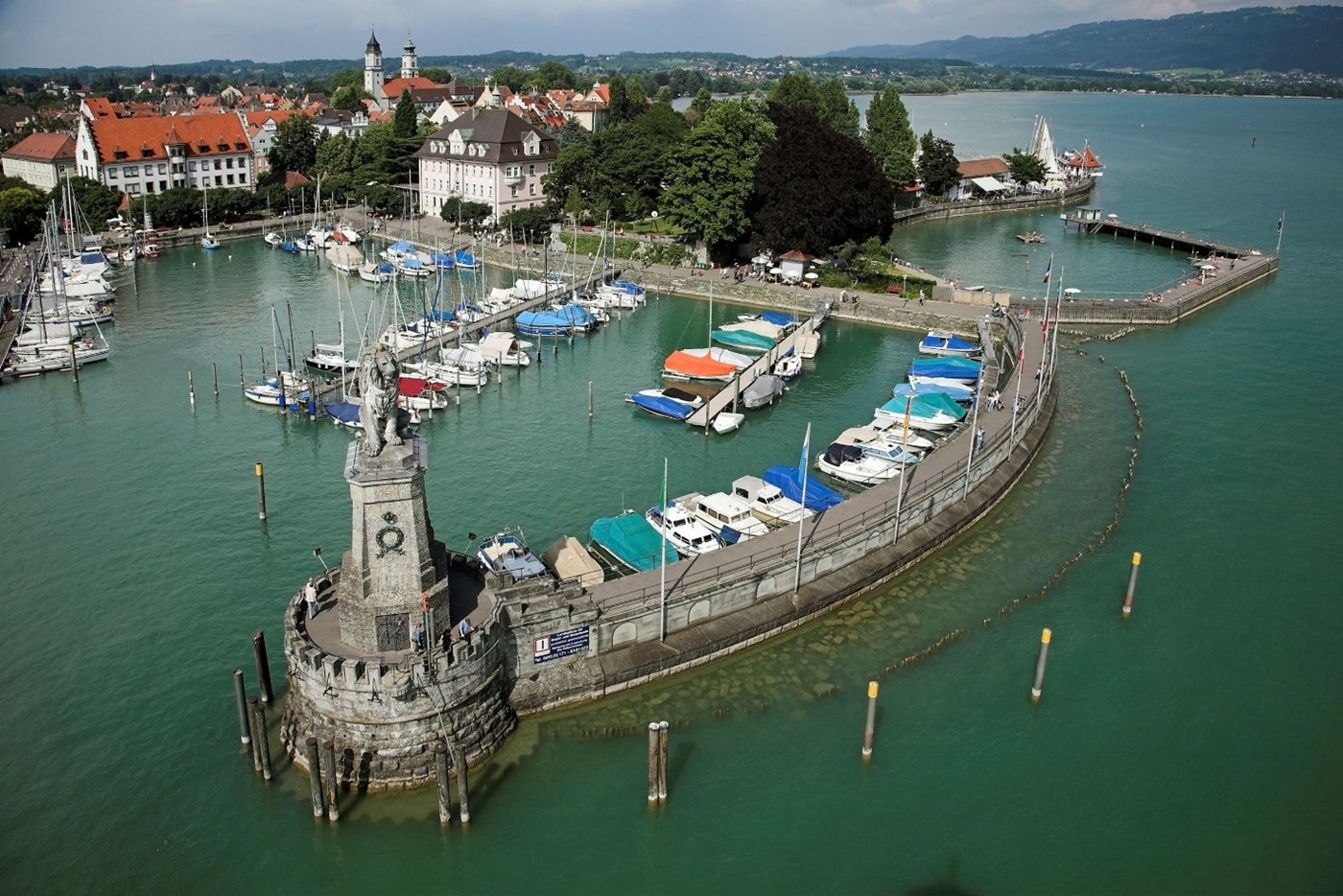 Lindau Situated in Bavaria, in southern Germany Lindau (24,000 inhabitants) Is  a picturesque medieval town and surrounded by the clear waters of Lake Constance.
Throughout its long history Lindau has been considered at times to be part of the Holy Roman Empire and Austria, as well as Germany. After World War II it was under French control, but has then been returned to Bavaria..
Lindau is a popular tourist attraction in the South of Germany. Lindau is island in Lake Constance connected to the mainland by a bridge, the island is a showpiece with its magnificent harbor, guarded by a Bavarian lion and ancient lighthouse.
Lindau old town with itsc enturies-old buildings, lively squares and picturesque alleyways, The heart of the town is the Marktplatz, which overlooks the Catholic church "Unserer Lieben Frau" dedicated to the Madonna and the Protestant church of St. Stephan.

must-dos in Lindau
Climb the lighthouse and enjoy the view.
The Lindenhofpark.
In December, a very special highlight is the island’s famous Harbour Christmas Market.
The maritime activities in the harbour and on the promenade, which is regarded as one of the most attractive on Lake Constance, can be watched from one of the many cafés.. 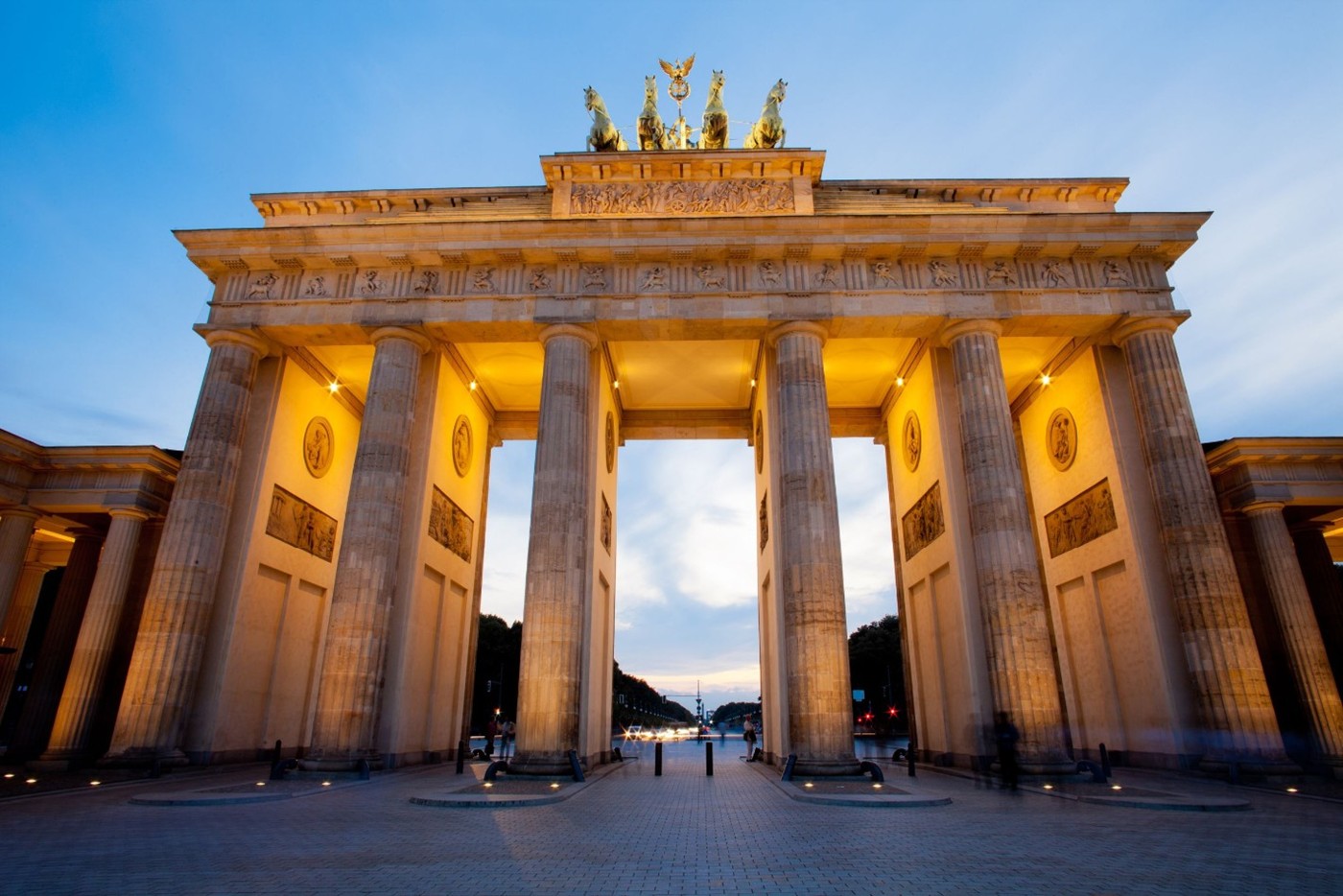 But after Napoleon was defeated, the Quadriga was returned to Berlin.
When the Nazis ascended to power in Germany, the gate was used as a party symbol.

December 1989 - that's when the Gate was opened as a border
Add: Pariser Platz, 10117 Berlin
Official site 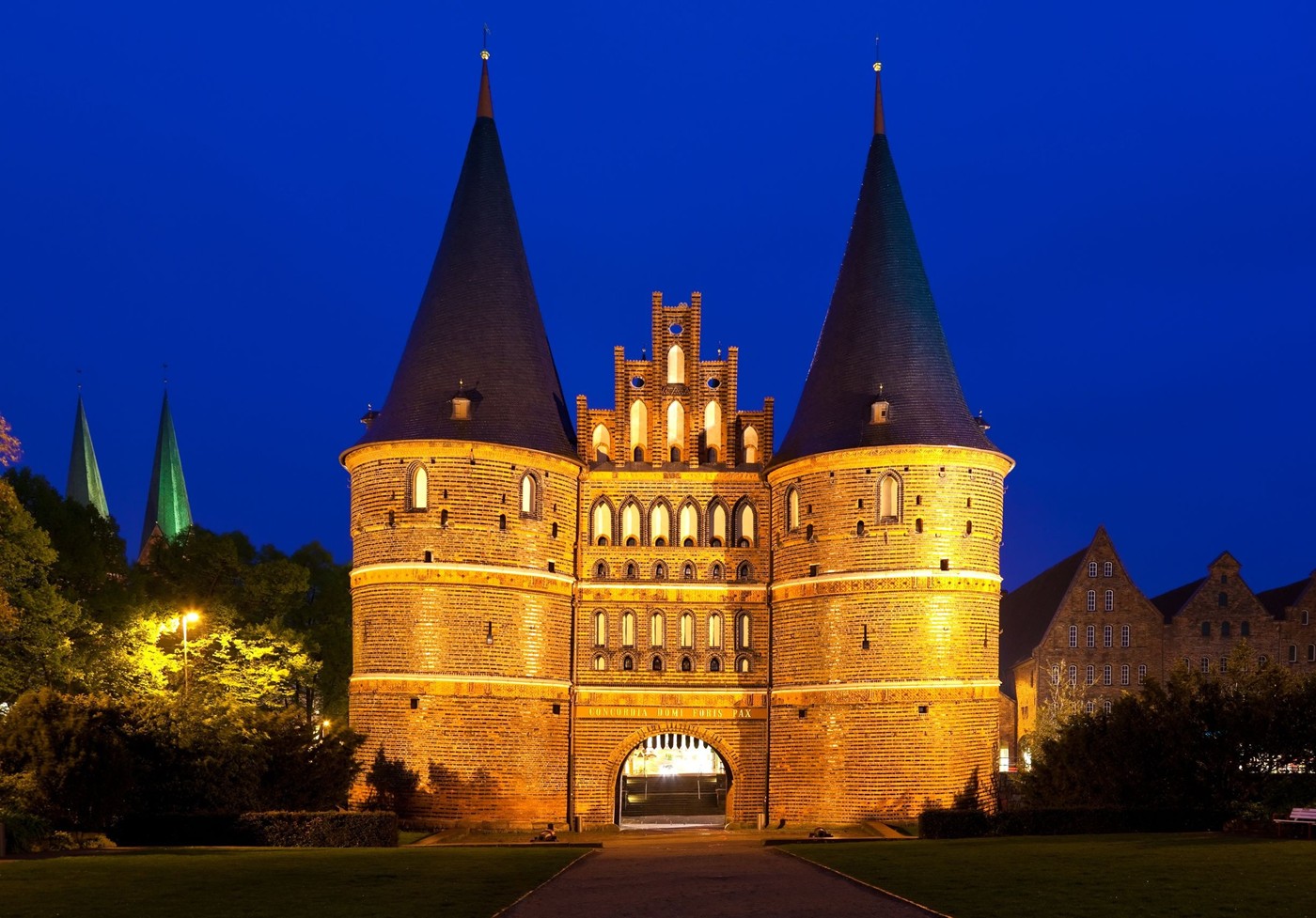 The Black Forest is a mountainous terrain at about 200-1500 meters (650-4900 feet) above sea level. in the state of Baden-Württemberg in southwest Germany.
The vast and alluring nature park stretches from the town of Baden-Baden to the Swiss border, and from the Rhine almost as far as Lake Constance.
It is full of trees, mountains, valleys and lakes, The Black Forest gets its name from the oppressive canopy of evergreens looming above the forest floor.(The Romans were the first to use the name “Black Forest.” The Roman soldiers were walking and their path was blocked by a dark, dense forest, They called it “Silva Nigra”, which means “Black Forest” in their Latin language).
Black Forest cake was named after the Black Forest. It contains several layers of chocolate cake, with whipped cream and cherries in between.
There are dozens of attractive villages, towns and cities to explore throughout the region, One of the most popular destinations is Titisee,and Baden-Baden is one of the picturesque towns of the Black Forest.
Is home to the cuckoo clock (They’ve been produced in the Black Forest since the 18th century), the Grimm Brothers’ fairy tales and world-renowned thermal spas. When Europeans discovered the healing springs at the beginning of the 19th century, Germany’s Black Forest became a popular destination for kings and queens, emperors and celebrities.
The  rivers in the Black Forest are The Danube, The Enz, The Kinzig, The Murg, The Nagord, The Neckar. 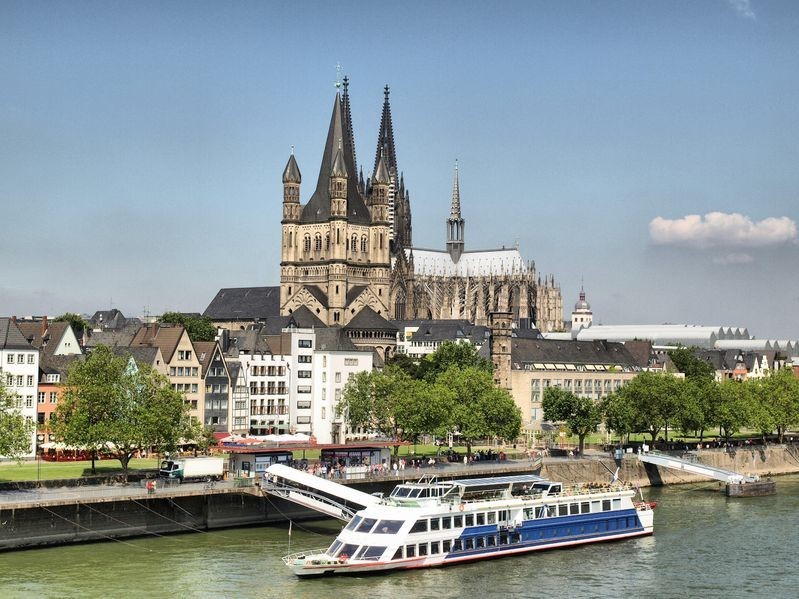 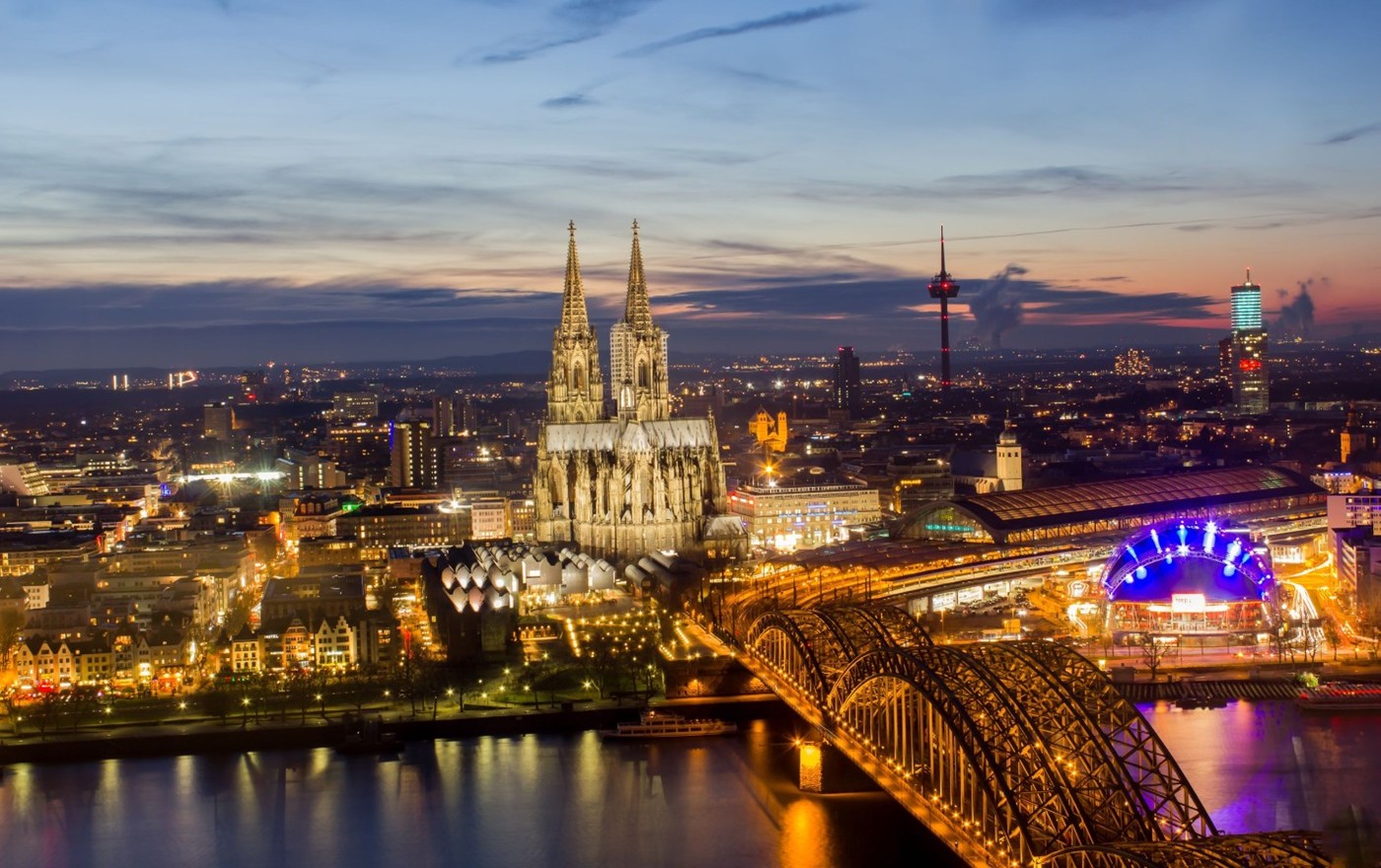 Cologne Cathedral is a High Gothic five-aisled basilica (144.5 m long), with a projecting transept (86.25 m wide) and The height of the northern tower of the Cologne Cathedral is 157,38 meters, while the height of the southern tower is 6 cm below that.
The nave is 43.58 m high and the side-aisles 19.80 m, and can hold more than 20,000 people (The view from the Cathedral tower is breathtaking, but you will have to climb 509 stairs to reach the viewing platform).
Official site 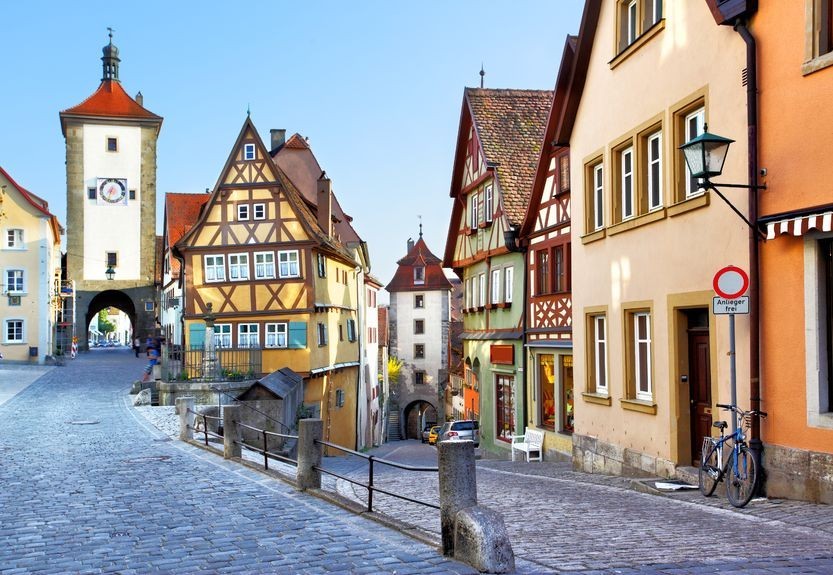 The Romantic Road The German Romantic Road is one of the biggest magnets for tourism in Germany, reveals the wealth of European history, art and culture. It’s a region known for its castles, vineyards and colorful half-timbered houses.
The Romantic Roadis a "theme route". It describes the 29 towns, 460 km (290 mi)  of surface roads between Würzburg(Here you can marvel at the Würzburg Residenz, one of the most significant buildings in Europe, and a UNESCO World Heritage site) and Füssen.

Part of the charm of this region is the picturesque towns and castles and discovery of walking trails through the vineyards in Picturesque locations are dotted along the way Friedberg in Wittelsbacher Land, Landsberg am Lech, Schongau, Peiting and Steingaden with their peaceful little streets.
Rothenburg  is the most famous town in the Romantic Road and perhaps the most charming one in Germany, and a small town, Dinkelsbühl, also offers an almost totally preserved medieval old town.
Simply follow the brown signs that link the individual towns along the Romantic Road.

Neuschwanstein Castle built atop a rock ledge over the Pöllat Gorge, in the Bavarian Alps, above the village of Hohenschwangau near Füssen in southwest Bavaria.
Construction began in 1868 and was never completed,new inventions such as electricity, plumbing and heat were used in the construction of the castle.
Neuschwanstein literally means “New Swan Castle” referencing of “the Swan Knight” one of the Wagner’s characters.
King Ludwig was a great admirer and supporter of Richard Wagner, the world-renowned composer and the castle was built in his honor.
Many rooms in the castle’s interior were inspired by Wagner’s characters, the entire fourth floor of Neuschwanstein also contains characters from Wagner’s operas.
The Neuschwanstein Castle is one of the most visited castles in Germany more than 1.3 million people visit annually.
Neuschwanstein Castle can only be visited with a guided tour.
Tours last about 30 minutes, after the tour you can watch on the 2nd floor a free show' about the history of the castle.

Heidelberg situated on the river Neckar in south-west Germany, about 80 km south of Frankfurt, is most famous for the venerable Heidelberg University founded in the 14th century.

Heidelberg is a popular tourist destination due to its romantic cityscape, the dreamy and romantic setting around Heidelberg Castle (The largest barrel in the world is stored in the castle's wine cellar, it has a capacity of precisely 221,726 litres) , the Philosophers Walk , the Baroque old town,In the centre of the Old Town is the Marktplatz square, which boasts one of Heidelberg's many beautiful fountains.
The Old Bridge, which crosses the Neckar River in the northern part of the Old Town and  the romantic cityscapes.

München (in German) comes from the word Mönch (monk). In the 12th century the Duke of Bavaria allowed monks to start a marketplace, apparently, it was very successful, as it has expanded into a huge city.
München, here the largest beer house in the world is located – Hofbrauhaus – where among many famous visitors were Lenin, Hitler, and Mozart.

Bamberg is a town in Upper Franconia,located on the river Regnitz close to its confluence with the river Main,is one of Germany's most beautiful towns.
The town dates back to the 9th century. Bamberg portrays itself as the Franconian Rome (just like Rome was built on seven hills). Bamberg has the magic of the past hanging in the air.

The name was derived from the nearby Babenberch castle.
Bamberg being home to Europe's largest intact old city wall.
Its Old Town has been a UNESCO World Heritage Site since 1993.The Old Town with its collection of narrow streets and tall historic buildings, this is the key part of the town that earned Bamberg UNESCO
in the Old Town everything is very close together.
Bamberg's well-preserved old town comprises three historical centres,the City on the Hills (Bergstadt), the Island District (Inselstadt) and the Market Gardener's District (Gärtnerstadt).

The imperial cathedral of St. Peter and St. George is the most prominent building.

Hamburg is the second-largest city in Germany after Berlin with a population of over 1.84 million.
Hamburg is a major international and domestic tourist destination. The Speicherstadt and Kontorhausviertel were declared World Heritage Sites by UNESCO in 2015.

The city lies on the River Elbe and two of its tributaries, the River Alster and the River Bille.(Hamburg's rivers and canals are crossed by around 2,500 bridges, making it the city with the highest number of bridges in Europe).
The Hamburg Metropolitan Region stretches from the North Sea to the Baltic Sea (The island Neuwerk close to Cuxhaven is actually part of Hamburg, even though it's situated 100km west of the city).
The city calls itself the “gateway to the world.”Hamburg is Europe's third-largest port.
Beset by disasters such as the Great Fire of Hamburg, North Sea flood of 1962 and military conflicts including World War II bombing raids, the city has managed to recover and emerge wealthier after each catastrophe.

The borough of Altona was part of Denmark between 1640 and 1864, thus the border between Germany and Denmark ran through St. Pauli for almost 2 centuries.
Altona is one of the  Hamburg's popular nightlife area.

Aside from its rich architectural heritage, Hamburg is also known for several theatres and a variety of musical shows.
St. Pauli's Reeperbahn is among the best-known European entertainment districts.
The Beatles actually began their music career in Hamburg.
This iconic band played approximately 270 shows in Hamburg.
West of the city centre of Hamburg at the river Elbe, has a neighbourhood called "Treppenviertel" (= "staircase quarter") where you can find more than 5000 steps.

Interesting and fun facts about Germany