Georgia Top Things to See & Do

Tbilisi is the capital and the largest city of Georgia. on the both sides of Mtkvari river and has the population of 1.152.000 people.
Founded in the 5th century AD by Vakhtang Gorgasai, the Georgian King of Kartli (Iberia) and made into a capital in the 6th centu- ry, Tbilisi is a significant industrial, social, and cultural center.
The Old Tbilisi, with it's small streets, hung with beautiful balconies and ve- randas, open cafes with pleasant music & Sulfur Baths, especially attracts the visitors.
The biggest trade road, the Great Silk Road, passed through Georgia's capital Tbilisi and made it an important place for many centuries.
This also played a significant role in the development of the city where the cultural interchange of both regions made Tbilisi a unique place.
However, it also brought many invasions over the period of its existence.
The capital has been burned down and rebuilt several times. And despite its violent past, Tbilisi succeeded in maintaining its charm and authenticity Narrow cobblestone lanes, old residential houses with wooden balconies and Art Nouveau buildings.

Ushguli is one of the most beautiful places in Georgia.
Ushguli is located in the municipality of Mestia, at the bottom of mountain Shkhara, near the confluence of rivers Inguri and Shavtsqala-Kvishara.

The highest continually inhabited settlement in Europe, at 7,000 feet.
Ushguli is a community of four villages Murqmeli, Chashashi, Chvibiani and Shibiani located in Svaneti, Georgia.
This community, with its houses each containing defensive towers, It is classified as a UNESCO World Heritage Site, along with all of Upper Svaneti.
Ushguli isn't in an accessible location. Due difficult natural conditions that locals live in, practically six months a year, from November to April, Ushguli residents are isolated from outer world due to snows that do not allow driving through winding roads even on utility vehicles.
The approximately 250 inhabitants of Ushguli make their living from agriculture and tourism, families have converted their houses into  guesthouses.
There used to be 300 towers in Ushguli, today just 30,Grouped like mini castles over the Inguri River, they form a very photogenic scene. a stone tower is adjacent to each house.

In the Middle Ages, they served a defensive purpose, and since then it has been the Svans' duty to preserve them out of respect for the memory of ancestors.
They say that Ushguli comes from Georgian phrase “ushishariguli” meaning “fearless heart”. It is one of the few places that have never been conquered.

To Do and See in Ushguli
Ushguli Tower - there will one tower that you'll see on your right when you pass the Ushguli bridge. This is the only tower that is accessible for people to climb up to the top of the tower.
The Ethnography museum located in Zhibiani is well worth , located in a preserved Svan house.

10km from town of Gori - built on a high rocky left of the Mtkvari River, it contains various structures dating from the Early iron Age to the Late Middle Ages and is notable for the unique combination of various styles of rock-cut cultures from Anatolia and Iran.
The caves were the site of pagan rituals, before Georgia became a Christian country.
At the top of the complex is a Christian stone basilica, dating from the 10th century.
The rock-cut structures include a large hall called Tamaris Darbazi, pagan places of sacrifice, dwellings, as well as functional buildings, like a phar- macy, a bakery, a prison and even an amphitheatre. They are connected by tunnels. 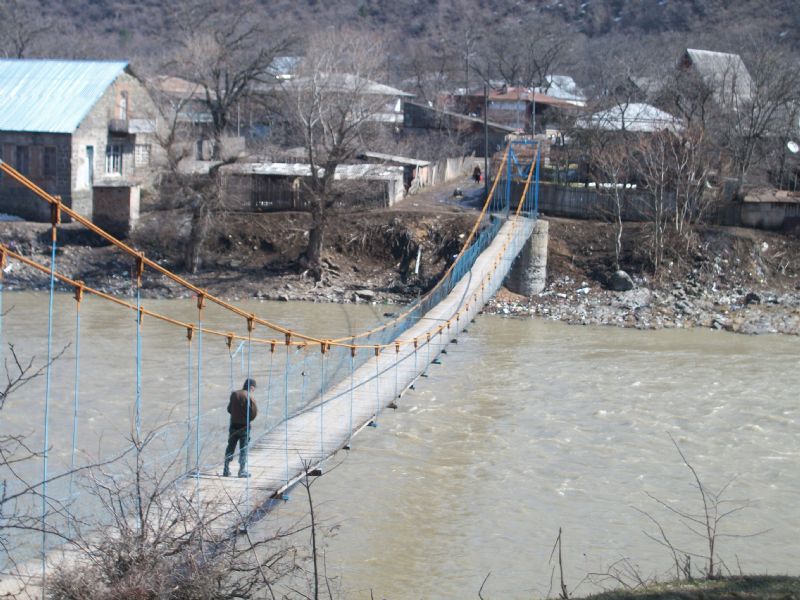 Svaneti is arguably the most beautiful part of Georgia, making it the country’s primary location for hikers and adventurers.

The highest peaks of the Greater Caucasus tower at over 4000m, breath-taking views, pristine mountains Beautiful wild and mysterious, deep gorges, gushing rivers and Uniquely picturesque villages and snow-covered.
Mestia is the center of tourism for the Svaneti region. and is the gateway to Svaneti This UNESCO World Heritage Site.
Svaneti is the historic home of the Svan people, a subgroup of Georgians.For centuries, these hardy people protected themselves, their  livestock and their valuables by residing in well-built, stone towers known locally as koshki.
The Svans have retained many of their old traditions (Svan culture survives most wonderfully in its songs and dances and  respect the older women in families). Svaneti is probably the most beautiful region of Georgia and the essence of what country can offer to the foreign tourists. 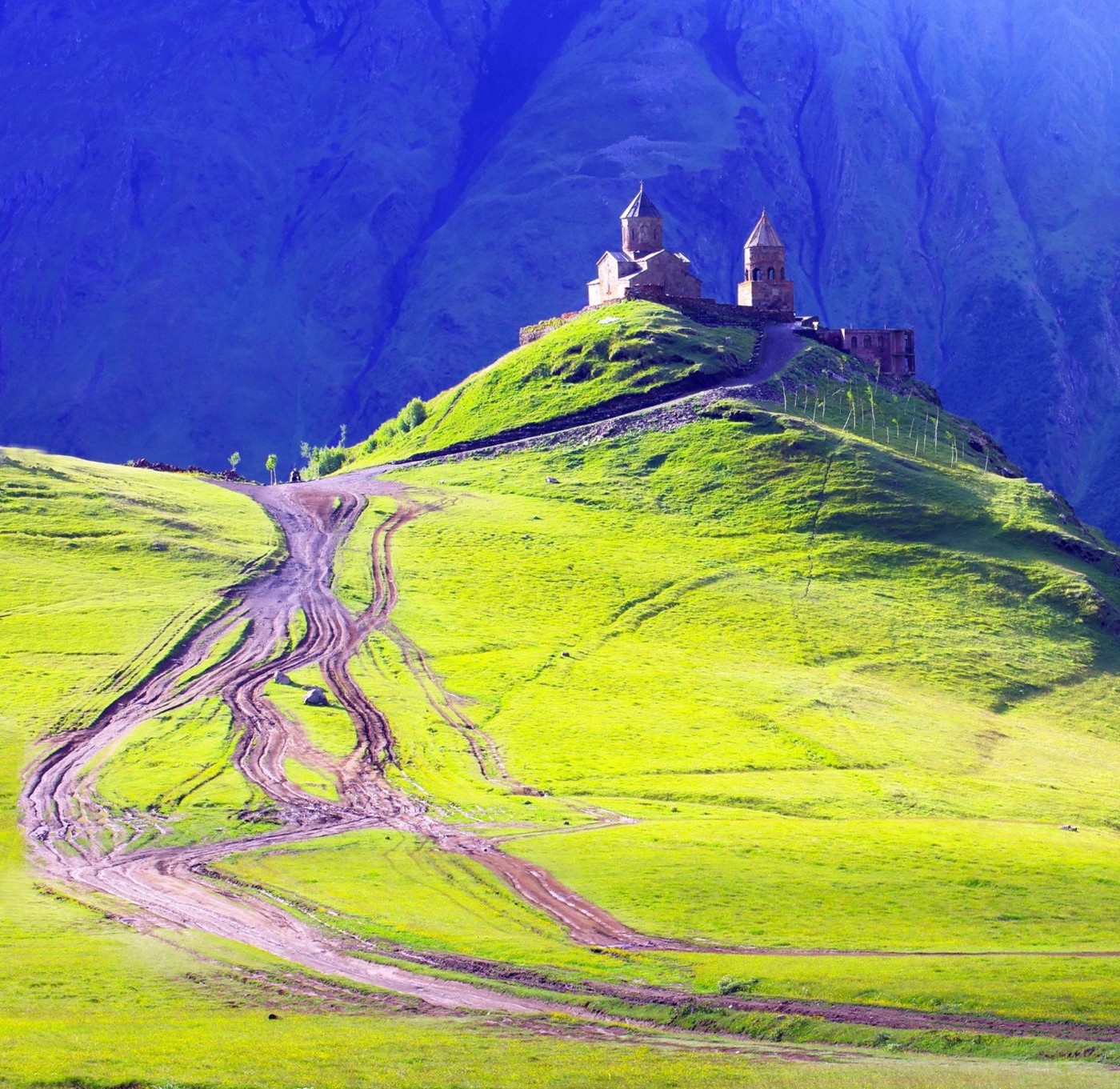 Mount Kazbegi. One of the absolute must-visit places in Georgia mainly because of its beautiful landscapes, high mountains, especially Mount Kazbek and its near location to central Georgia and capital Tbilisi.
It is the third-highest peak in Georgia and the seventh-highest summit in the Caucasus Mountains. The name in Georgian, Mqinvartsveri, translates to "Glacier Peak" or "Freezing Cold Peak".
The name Kazbegi is also connected to famous Georgian writer Alexander Kazbegi (1848–1893).

Stepantsminda
Small town Stepantsminda formerly Kazbegi, and It is the center of the Kazbegi Municipality. Stepantsiminda is known for its scenic location in the Greater Caucasus mountains.

Local attractions include the Gergeti Trinity Church outside of town, as well as Mount Kazbegi itself and the alpine meadows and forests of the surrounding Kazbegi Nature Reserve. Alexander Kazbegi is buried in his ancestor's home which now is a museum in his honor. In the center of the town stands monument of the writer.

There’s actually plenty of fun outdoor activities to enjoy here, such as: Hiking or taking a taxi to the stunning Gergeti Trinity Church,Hiking to the Gergeti Glacier,Rafting in the Snotskali River,Kayaking in the Tergi River,Visiting the waterfalls in Gveleti and Arsha-Pansheti,Bathing in the nearby mineral water springs,Horseback riding in the mountains.
Tip To get to Kazbegi, you’ll need to take the Georgian Military Highway which weaves through the Caucasus Mountains.
There are some parts of the road that are pretty steep and winding.