Denmark Top Things to See & Do

Denmark Top Things to See & Do- The Little Mermaid Copenhagen 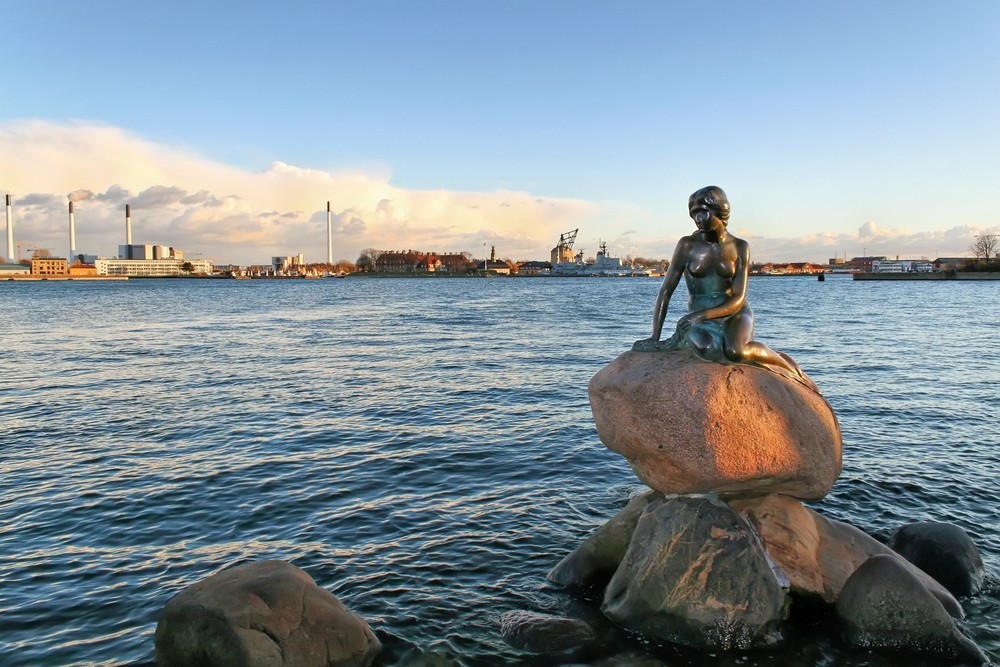 The Little Mermaid is a bronze statue , depicting a mermaid becoming human.
Unveiled on 23 August 1913 on a rock by the waterside at the Langelinie promenade in Copenhagen.
Like many statues before her, the Little Mermaid has suffered through many acts of vandalism which includes being shoved off the rock she is perched upon and vandals stealing her arm.
The sculpture of The Little Mermaid is a copy the sculptor’s heirs keep the original at an undisclosed location.
So what you see in Copenhagen is already a copy.
What surprises most tourists is the small size.
The bronze statue is only 165 centimetres high sitting on a natural rock.
The sculpture of The Little Mermaid was inspired by Hans Christian Andersen’s famous fairy tale in 1836.
It is the story of a 15 year old Little Mermaid who saves the life of a shipwrecked prince and sets off on a perilous quest to win his love. Disney adapted Anderson’s story into an animated film in 1989.


Denmark Top Things to See & Do- The Danish Riviera.

North Zealand, north of Copenhagen, has been named the Danish Riviera.
There are many reasons for this.
Stunning landscapes, castles and museums, beech forests,endless sandy beaches,the delicious food, the exceptional experiences, a pearl row of idyllic small towns and Three of the country’s most spectacular castles make North Zealand an all year-round favorite.
North Zealand—known as the Danish Riviera—is just under an hour from the capital.
Dont miss
The area is home to some of the nation’s top art museums.
Louisiana Museum of Modern art is situated in Humlebæk. It is the most visited museum in Denmark.

Tivoli, also known as Tivoli Gardens, is an amusement park in Copenhagen.
The park opened on 15 August 1843.
With over 4.5 million visitors Tivoli is the second-most popular seasonal theme park in the world after Europa-Park.
You'll find a huge range of attractions including a roller coaster, roundabouts, puppet theaters, restaurants, cafés, gardens, food pavilions,  enjoy the scents of hundreds of blossoming summer flowers and perennials at the Concert Halls Gardens,and  Petzi’s World, an area with 40 activities aimed specifically at little ones.
(In the first few years, there was only one rollercoaster offering a seven-second “thrill” ride to guests).
Hans Christian Andersen visited many times, as did Walt Disney who even found the inspiration to his own Disney World here,writing down notes about everything he saw.
It is located directly in downtown Copenhagen, next to the Central rail station for the city.

Nyhavn is a 17th-century waterfront, canal and entertainment district in Copenhagen.
Originally, Nyhavn was a busy commercial port where ships from all over the world would dock. The area was packed with sailors and ladies of pleasure.

Today the beautiful old houses have been renovated and restaurants dominate the old port.
The northern side of Nyhavn is lined by brightly coloured townhouses built with wood.
Copenhagen’s Nyhavn Canal district offers a lovely view of the city’s harbour.Nyhavn Canal extends from the Kongens Nytorv (aka the King’s New Square) half a kilometer all the way to the harbour, ending at the spectacular Royal Playhouse along the waterside.
Nyhavn is filled with people enjoying the relaxed atmosphere by the canal, jazz music and food.
The famous Danish fairytale writer, Hans Christian Andersen, used to live in no. 18 (From 1871-1875).

Ribe is a small town in south-west Jutland,(on the Ribe River, 4 miles (6 km) from the North Sea) with a population of 8,500.
Ribe was founded by the Vikings in the 8th century, is the oldest extant town in Denmark
(and in Scandinavia, The town celebrated its 1300th anniversary in 2010).
Ribe is a picturesque place with a lot of history.
The town has many well-preserved old buildings,The Romanesque Ribe Cathedral dates from 1122 to 1170 and about 100 houses are under Heritage Protection (including one that served as a school from 1500 to 1856).
Denmark's oldest town hall (The building was erected in 1496) is found on the town's Von Støckens Plads.
St. Catharine Abbey and Monastery It was founded in 1228
Some of Southwest Jutland's whitest, sandiest beaches are less than an hour from Ribe.

The town is at the northernmost point of Sjælland in Denmark.
It has a population of 6,500.
The Gilleleje’s focal point is its harbour.
This is where you naturally gravitate to soak up the atmosphere, stroll along the pier and look out at the fishing boats and sailors, but so is the original fishing village’s narrow streets with charming thatched fisherman’s cottages.
Here you’ll find one of over 150 Danish Blue Flag awarded beaches.
In October 1943, the Danish underground initiated an operation to transfer Jews to the Swedish coast in boats, thereby saving most of Denmark’s Jews.
Gilbert Lassen, a fisherman from the village of Gilleleje,ferried the Jews in his boat to a ship waiting about 200 meters from the shore, which took them to Sweden.
You can learn more about these efforts at the local museum.

The old narrow streets of the old city centre is a lovely place, historic houses with quaint backyards are situated alongside an array of shops, cafés and restaurants.
It is known for its castle Kronborg, which William Shakespeare presumably had in mind for his famous play Hamlet.
Other attractions
Helsingør  City museum : Its collections provide a picture of the town's history from medieval and Renaissance finds  to our own age.
In Helsingør Harbour you will find the architecturally fascinating Maritime Museum of Denmark.
Danmarks Tekniske Museum (Technical Museum of Denmark)

Aalborg is ancient Danish city, is Denmark's fourth largest city with an urban population of 140,000.

Aalborg is an important cultural hub. It’s known for theatre, symphony and opera, as well as the Aalborg Carnival, held at the end of May, is one of the largest festivals in Scandinavia, attracting some 100,000 people annually.
The European Commission has concluded that the citizens of Aalborg are the most satisfied people in Europe with their city.
Aalborg is ideally located for access to Scandinavia and the rest of the Europe. Aalborg is close to the Scandinavian cities of Oslo and Gothenburg, a 35-minute flight away from Copenhagen, and an hour's flight from Amsterdam.

Odense  is the third-largest city in Denmark. It has a population of 180,000.
Odense is a cultural and historical city where you can sense the city's long history clearly.
There has been human settlement in the Odense area for over 4,000 years, although the name was not mentioned in writing until 988.
Hans Christian Andersen was born in Odense, and his lively imagination continues to inspire the city.
Odense is also a vibrant and urban city, a lovely city centre with historic buildings, beautiful parks, museums, small cozy venues and theatres offers the opportunity for cultural experiences, shopping where you have the opportunity to take part in the good local life,taste the vibrant local food scene.
Many of its attractions are a treat for tourists’ eyes, the list includes
Egeskov Castle,Odense zoo,The Danish Railway Museum,The Funen Village  which recreates life during Andersen’s years there.

Aarhus is the second-largest city in Denmark.
It is located on the east coast of the Jutland peninsula, in the geographical centre of Denmark, 185 km northwest of Copenhagen and 290 km (180 mi) north of Hamburg, Germany.
The history of Aarhus began as a fortified Viking settlement founded in the 8th century and with the first written records stemming from the bishopric seated here from at least 948.
It’s a historic city that remarkably feels like one cosy neighbourhood, where all of the biggest sights and attractions really are within walking distance of each other.
With over 10% of the population being students, the atmosphere in Aarhus is laidback and youthful.
The city boasts impressive museums and cultural spaces.
The harbour is a major attraction in itself where you can get up close to some of the city’s most exciting attractions.
There are famous sights in Aarhus, south of the city centre, you can visit the summer home of Denmark’s Queen Marguerite.
If she’s home, you can watch the changing of the guards every day.
In 2017, Aarhus was European Capital of Culture along with Paphos in Cyprus.

Visit Denmark Pictures of Denmark That Will Inspire You

Visit Cyprus Pictures of Cyprus That Will Inspire You

Visit Bosnia Pictures of Bosnia That Will Inspire You