Belgium Top Things to See & Do

Brussel The capital of Belgium.
Brussels is a charming city with a lot of history and a lot of fun things to do.
Brussels is one of the most fun in Europe.
Brussels  small size makes it perfect for day-tripping travelers. statues, parks and hills, monuments, churches, parks and architecture,variety of medieval buildings,some amazing and quirky museums, and even Europe in miniature.
Brussels is also one of the best European cities to go shopping in thanks to its 19th-century shopping arcade.
The city centre are lined with Michelin-starred restaurants.
For travelers to Brussels, won’t lack for things to do and see.
Interesting and fun facts about Belgium

Antwerp is the second largest city of Belgium.
Antwerp is situated on the Schelde (Scheldt) River. less than a one-hour ride by car or train from the capital, Brussels.
The city plays the role of unofficial capital of Flanders.It is renowned for being the "world's leading diamond city" and more than 70% of all diamonds are traded there.
In the fifteenth and sixteenth centuries Antwerp already was a city with an international reputation. Napoleon, acquired the Royal Palace in Meir in 1812. There he quietly devised military strategies for his war against Britain.
Pictures of Belgium That Will Inspire You
Antwerp has everything a traveller should wish for in a European city This bustling city combines the charms of its historic past and the exciting and quirky present, filled with grand buildings and fascinating museums.
You can take walking tours while   tasting, fries and chocolate and enjoy boat rides on the Scheldt River. 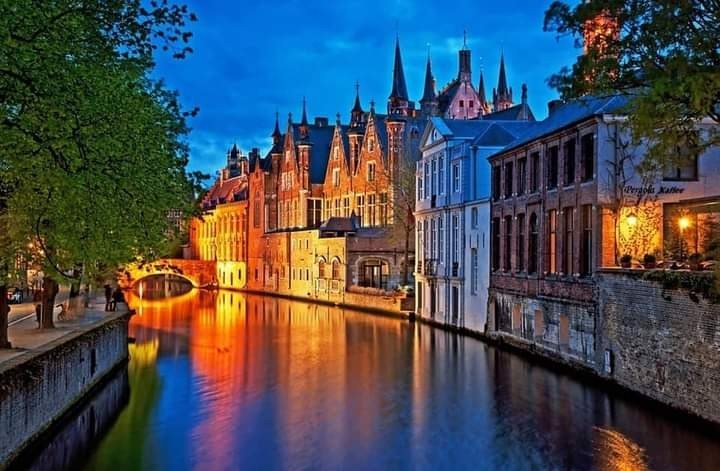 Bruges “Venice of the North”.
The small town of Bruges is every traveler’s dream.
It’s easy to see how the storybook city of Bruges, earned its nickname ‘The Venice of the North.’
Boasting miles of canals that wind through the historic, colourful city.
Bruges Canals loop across the town like a string of pearls.
There are not many cities in Europe that can compete with Bruges  for being the most romantic city on the continent.
The perfectly-preserved medieval buildings With cobblestone paths, brick archways, stone churches and quaint bridges are protected as a UNESCO World Heritage Site.
Belgium Travel guide

Donot miss
There are many places to visit in Bruges.
It is really worth staying for the night and enjoy the special nighttime ambience of Bruges,at night it becomes a calm medieval town, where time seems to have stopped.
Get lost in its narrow streets with traditional townhouses and mysterious nooks and crannies or enjoy the view of the city from the bell tower.
Visiting chocolate shops,Basilica Of The Holy Blood,Salvador Dali’s Exhibition,Burg Square,Canals Of Bruges, Lace Store.

Despite being one of Belgium's oldest cities,(In some respects, Ghent’s history is similar to Bruges) Ghent remains small enough to feel cosy.
Ghent is a vibrant university city with beautiful Gothic monuments, picturesque cobblestone streets, bustling squares, and restaurants. Located about an hour’s drive west of Brussels.
Ghent was founded during the ninth century.
In late medieval times, Ghent was the largest city outside of Paris and one of the most powerful and wealthiest cities in Europe.

Donot miss
The opera house,  museums,  ancient churches, and bridges spanning the two rivers that wind themselves through the city.
The city’s historical centre, and three towers of St Nicholas Church.

“Tournai – Belgium’s best-kept secret”.
Tournai, is a great place to go and see the country’s past, is one of the oldest towns in Belgium.
The charming Belgian town located between Paris and Brussels on the river Scheldt.
Tournai is one of few Belgian cities to have such a wide variety of architectural styles.
The city  is proud of 2 monuments listed by UNESCO as world heritage.
Belfry A UNESCO World Heritage Site.
Tournai's Notre-Dame Cathedral UNESCO World Heritage Site (The cathedral is closed Saturday and Sunday mornings).
Brussels Top Things to See & Do

Donot miss
The Grand Place Enjoy a drink in Tournai square.
The Halle aux Draps (Cloth Hall), a stunning 17th-century.
Walk along Tournai’s most prestigious medieval architecture.
Pont des Trous (Bridge of Holes), remnants of the city's medieval military architecture.
Tour the Museum of Natural History of Tournai.
The annual Beer Festival, when the city is host to dozens of artisanal beer makers.

Mechelen (Malines in French) a hidden gem.
Although the smallest of the Flemish art cities, Mechelen is well worth a visit. there are so many great reasons to visit Mechelen.
From the history and stunning architecture to the festivals and Belgian beer.
The River Dijle meanders through the city, the city charming and beautiful, its streets are surprisingly packed with history With Belgium’s foremost cathedral as a highlight.
Located between Antwerp and Brussels,and is just as easily reached from Ghent too,Mechelen is one of The most convenient cities in terms of location.
The Grote Markt is a perfect place to start a visit, has been Mechelen’s centrepiece for centuries.

Do not miss
Top of St. Rumbold’s Tower the former.
palace of Margaret of Austria.
Kazerne Dossin-this memorial and museum explores the history of Mechelen in World War II. During the war, Mechelen was the centre of deportation to Auschwitz where nearly 26,000 jewish were deported from the city.

Dinant a medieval town, is a small town located in the Namur province on the Meuse River is in an incredibly picturesque spot.
Set between a dramatic cliff and the river, charming and picturesque a stunning spectacle, especially when you lift your gaze towards the Citadelle and the onion-domed.
There’s colourful buildings, a majestic church, and a giant mountain in the background.
But  if the water is calm, it’s all doubled on the water.
Its old town is perhaps one the most impressive sights in Belgium. The historic part of the city below the citadel has been carefully rebuilt and preserved.
Dinant is well-known and linked to the birthplace of Adolphe Sax, the founder of the Saxophone.
Dinant is 65 km south of Brussels, and There are about 10,000 people in the town of Dinant.
In the past, due to its strategic location on the Meuse, Dinant was often exposed to battles,in the Middle Ages.
It was all but razed by the invading Germans in 1914, after the Battle of Dinant. 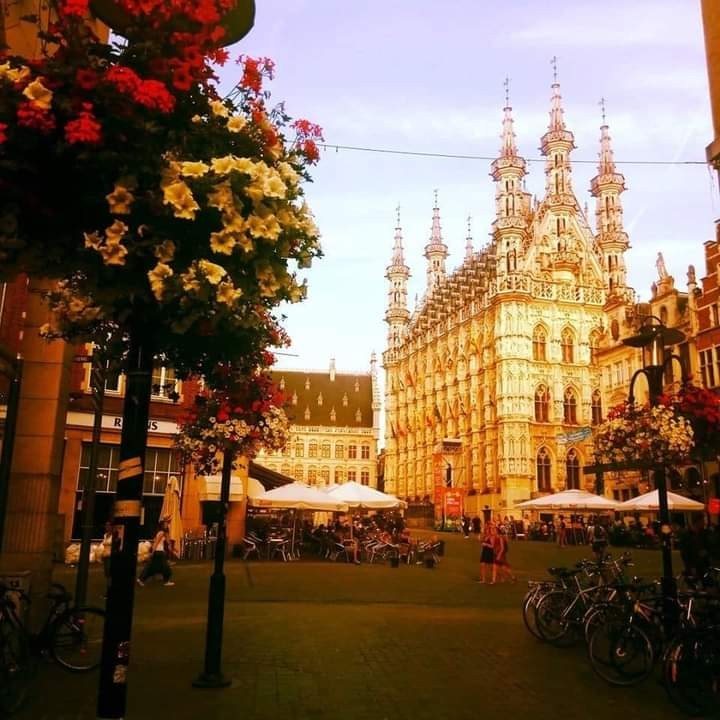 Leuven is the perfect mix of old and new.
Is a dynamic city of about 100 000 inhabitants.
Leuven’s most iconic sight by far is its town hall - an incredible 15th-century  late-Gothic building.
Belgium's most famous university town.
The Universiteit Leuven (KU Leuven)  is the oldest in the Belgium (founded in 1425).
For centuries, the university played a crucial role in Leuven’s development.
In fact, thanks to the library, for a time Leuven was dubbed the “Oxford of Belgium“.
In August of 1914, invading Germans set the library alight in retaliation to supposed local sniper attacks.
Leuven is situated right in the centre of  Belgium, east of Brussels (20km).
Leuven contains two UNESCO World Heritage Sites, the Groot Begijnhof (Grand Beguinage) and  the University buildings and the Historic Centre.

What to expect
Visit Grote Markt or Mayor square.
The Church of San Pedro and the famous Town Hall.
"The longest bar in the world" in the Oude Mark.
you will see the important university and the impressive library which were rebuilt after World War II.

Waterloo is obviously known for the famous the defeated battle by Napoleon on 18 June 1815 under the command of the Duke of Wellington.
Where Napoleon Bonaparte went down to his final defeat.
Waterloo located south of Brussels, and Waterloo is home to the European headquarters of Mastercard.
The Lion’s Mound and panoramic painting of the Battle of Waterloo (1815) are the main sights to see.
The battlefield actually lies some 4 km south of the town of Waterloo.
History buffs will love visiting these things to do in Waterloo,but there are plenty of other things to see and do in and around Waterloo.
The Wellington Museum,Church of Saint Joseph,Castles of Argenteuil,Golden Palace casino,The Hougoumont Farm.

Liège  it is a varied city with a lot of history and culture,  lies within Belgium's Ardennes region and is spread around the Meuse River.

Liège, known as the ‘ardent city’,Plenty of museums and the famous Liège aquarium, there is always something to see or to visit and perfect starting point to explore the Belgian Ardennes.

Liege is the third largest city in Belgium has a population of about 200,000.

Blessed with its history the central area of Liège is rather an interesting combination of a historic neighbourhoods  around the street known as the Féronstrée.
Here  the tourist information office.

Dont miss
Place Saint-Lambert square is the historical and traditional heart of Liège.
The Saint Paul Cathedral, Palace of the Prince Bishops, the Town Hall (Stadhuis).
A walk through the green spaces along the Coteaux de la Citadelle, and the old city fortifications.
One of the most famous of all the sights in Liege is the Mountain of Bueren steep staircase with almost 400 steps, where at the top you can enjoy some spectacular views of the cityscape.